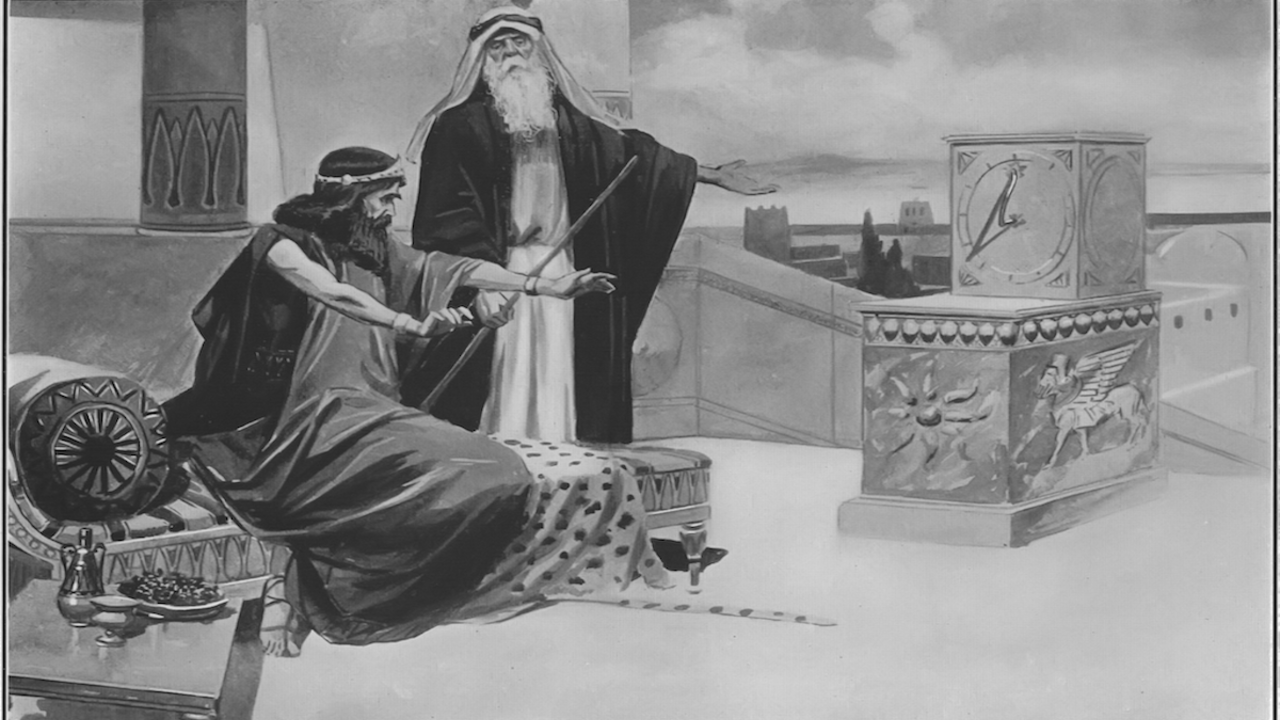 In Part 1, we saw King Hezekiah get some bad news from the prophet Isaiah. It was basically a death sentence. Through the esteemed prophet, God told him that he was a dead man. Hezekiah, the 39-year-old king, immediately cast himself upon the Lord in brokenness and tears and appealed to him to reconsider. His tearful plea included a reminder of his integrity and his good deeds. His appeal to his own successful track record apparently did not impress God. But as we’ll discuss below, his brokenness did.

Isaiah 38 teaches, among other things, that God is a compassionate God and is not impassive to someone’s suffering and tears. This was the case with Hezekiah. After Isaiah delivered the bad news, the text says, “Hezekiah turned his face to the wall” (v. 2). My understanding of that phrase is that the king simply doesn’t want anyone to see him cry, so he turns away from whoever was there. That is quite a normal human reaction when someone is overcome with deep emotional pain. But, of course, the king could not conceal his emotion. It was not that kind of crying. The ESV says he “wept bitterly,” which is a good, smooth translation and probably representative of most English versions. The Lexham English Bible (LEB) renders it as, “Hezekiah wept with great weeping,” which carries a more word-for-word rendering of the original. The Complete Jewish Bible (CJB) says, “He cried bitter tears.” I think the simple point is, whether Hezekiah’s back was turned or not, he wept uncontrollably, probably with heaving sobs. There would be no hiding his grief at this news. And it is this deep pathos that captures God’s heart and moves him to relent.

Now we need to grapple with the matter of the 15 years. I’m in agreement with other scholars who contend that the Lord’s initial announcement to Hezekiah was not merely the delivery of a death sentence. Nor was his follow-up announcement (after God relented) merely announcing that the king would die at the age of 54 (since Hezekiah was 39 at the time). Rather, it is probably best to see this more as an invitation for Hezekiah to move more deeply into the heart of God—something God knew Hezekiah would need for what he would soon have to face as King of Judah. After all, there was much on the line—namely, a massive Assyrian empire that had plans to overrun Judah. The Lord knew that no ordinary or superficial faith would suffice. Hezekiah needed full and complete dependence on Yahweh. And no one arrives at that level of spiritual maturity without wrestling with God in sustained seasons of prayer.

We see other examples of this kind of thing elsewhere in Scripture. Two specific passages come to mind, but I suspect there may be more. The first one is in Genesis when the Lord allows Abraham to overhear his plans to destroy Sodom and Gomorrah (Gen. 18:22–33). Because Abraham knows his nephew Lot resides there and would be in imminent danger if God executes his plan, he begins interceding for him. What follows is an exchange where Abraham pleads with the Lord to spare the city if he finds 50 righteous people there. The Lord agrees without resistance. Then it goes to the next round where Abraham pleads for 40, wherein the Lord readily complies. Next, Abraham pleads for 30, and then 20, and then 10. In every case, the Lord agrees without resistance. It seems to me that this exchange is not just about reaching a final number. It’s about how hearts bind themselves to each other at a much deeper level than an intellectual exchange of thoughts. All the emotion and weight of the moment that comprise this intimate exchange is formational in nature. After all, why did God allow Abraham to be privy to his plans about Sodom in the first place? It was not merely to impart information, but to engage Abraham at a much deeper and more emotional level. I think something similar is at work for Hezekiah in Isaiah chapter 38.

Another passage that runs along the same line is 2 Kings 13:14–19. It is the story of Elisha the prophet on his death bed. Joash, the king of Israel, fears that the loss of such a man of God as Elisha would bode ill for the nation since they were vulnerable to their enemies, especially the Arameans just east of them at Aphek. So Elisha tells the king to grab a bow and arrow (symbols of strength and victory) and to shoot an arrow out the east window (toward the direction of the Arameans). He does so and Elisha promises the king victory over them. But since Israel was beset by other enemies elsewhere, Elisha instructs the king to shoot more arrows in the ground. So he shoots one into the ground. And then he shoots a second, and then a third. But he stops after the third. The fact that he stopped shooting arrows into the ground upsets Elisha because Joash’s weak faith will bode ill for him and the nation. The idea was that each arrow he shot procured for him a future victory in battle, which was the point of the first arrow that Elisha had Joash shoot. Because he only shot three, he was assured now of only three victories. The clear implication is that if he had shot six, or eight, or a dozen—or however many—he would have procured for himself and his nation that same number of future victories. In short, Joash was not spiritually up for the task of leading his nation against all the forces they were soon to face.

So what is the upshot of all this? One thing (though there may be others) is that God is ever bidding us to seek more from him. But it may not be a direct, straightforward invitation to do so. Instead, he may offer something lesser than our heart’s desire so that our gnawing ache of unfulfillment drives us deeper into a more robust prayer life which has the effect of forming and shaping us into more seasoned servants who will be more faithful stewards of God’s abounding grace. Yes, God is a giving God and loves to give of himself endlessly. But he also cares for us deeply and understands that to whom much is given, much is required. That is, more from God results in a greater burden of stewardship. That, in turn, requires greater faith and a closer walk with God—all of which require a deepening prayer life resulting in an increasingly intimate walk with God. So while God wants to give us more, at the same time he wants to develop us so that we can properly handle what he gives.

So if we, or the people we come alongside to help, are grappling with an answer to prayer that leaves us somewhat unfulfilled, perhaps we need to see it not as a final answer from God, but more as an invitation to go deeper in prayer with God about it. It may be that he wants to give it, but we are not yet where we need to be spiritually to receive it in a way that would be a true blessing to ourselves and others, whereby God would be glorified in it.