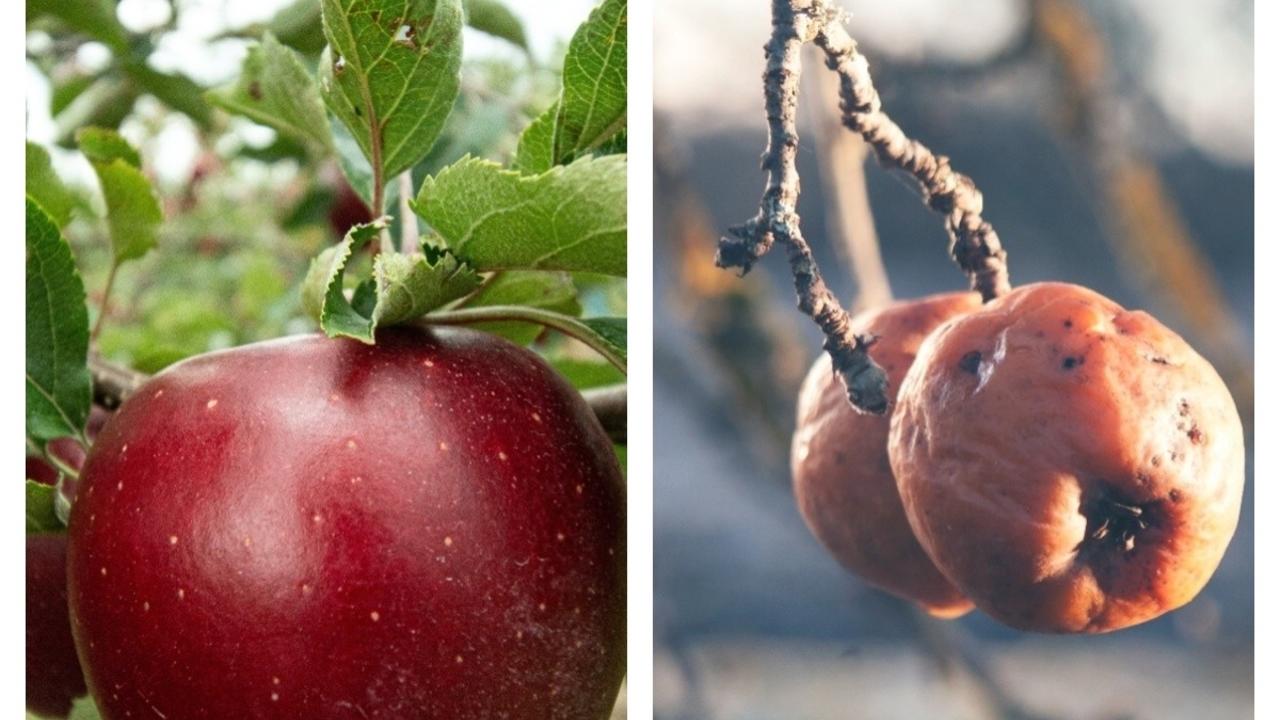 When Jesus says, “the tree is known by its fruit,” in Matthew 12:33 (ESV), what is the nature of the fruit he’s referencing and how do we apply it today? The answer to that question is the topic of this blog, although our limited space allows for only a few brief suggestions, while leaving much unsaid. In Part 1, we’ll consider briefly three other places where Jesus makes an identical (or nearly identical) statement—made nowhere else by anyone else in the New Testament—and then in Part 2, we’ll zero-in on Matthew 12:33–37 as our primary focus.

Aside from Matthew 12 (which we’ll discuss later), we find the three other “tree-known-by-its-fruit(s)” statements in Matthew 7:16, 7:20 and Luke 6:44. Before commenting on any differences we find between them, let me first mention something about the context in which we find each of these. The statement itself is embedded in a passage of Scripture that Bible commentators sometimes refer to as The Parable of the Tree and Its Fruit. In the Matthew 7 passage, the two statements there stand in close proximity to each other near the end of the Sermon on the Mount and just prior to Jesus’ well-known saying about the wise man who builds his house on the rock. Similarly, in the Luke 6 passage, it likewise appears toward the end of the Sermon on the Plain just before the “wise-man-rock” analogy. Except for one observation, we need not spend any additional time on the Luke 6 passage since the whole of what Luke provides is fully contained in the combined passages of Matthew 7 and Matthew 12.

With that in mind, let’s compare these four statements (all ESV):

Matthew 7:15, “You will recognize them by their fruits.”

Matthew 7:20, “you will recognize them by their fruits.”

The first observation to make is that the Luke statement is the most specific statement of the four. A more literal rendering would be this: “Each tree is known by its own particular fruit.” The implication here is that the orchard farmer must evaluate the fruit of each tree. All the trees in a given orchard might all look the same (e.g., peach orchard), have all the same kind of leaves (e.g., green, glossy, cat’s-eye shape), and produce all the same kind of fruit (e.g., yellow peaches). But if one or more of the trees in that orchard is blighted, dwarfed, or diseased, then any such tree is fundamentally different than the others. That is, the peach orchard farmer cannot accept a “bad peach tree” the same way he does the healthy ones even though it is the same genus of tree. For example, I have two identical Red Japanese Maple trees in my back yard that were planted many years ago on the same day as young trees, both being about the same size. Even though I say “identical,” they are identical in terms of the tree itself and the color and shape of its leaves. One can easily discern that the two trees are the same kind. Yet they are significantly different in quality. For even though they are only about twenty-five feet apart from each other, one is healthy and flourishing, but the other is dwarfed and unhealthy. And it has been that way for years. (In fact, I’m finally about to dig up the one and get rid of it. Guess which one that would be?)

The next observation I note is that the two instances in Matthew 7 (verses 16 and 20) are identical statements. Twice in the same immediate context, Jesus says to the disciples, “You shall know them by their fruits.” So, who are the “them” he is referring to? The previous verse tells us: “Beware of false prophets who come to you in sheep’s clothing” (7:15). It’s probably better to render that last part as “shepherd’s clothing,” since the idea is that their clothing identified the type of work they did. Shepherds in ancient Israel were fairly easily identified by an outer garment made of camel’s hair that repelled water (nice to have for rainy days) and kept them warm when sleeping in the open under the stars. They also carried a long staff and a shorter rod (or club), as well as a sling for basic protection. These were identifiable tools of the trade. By way of application to our day, Jesus’ warning would be referring to modern-day professionals who promote themselves as trustworthy guides for anybody lost or floundering, or hungry for help, or hurting in some way. Yet, such individuals cannot deliver what they advertise. Now, it is immediately after this warning that we find our statement, “You shall know them—i.e., all such false advertisers—by their fruit.” Thus, the wise person can recognize such charlatans easily enough if one only takes the time and effort to do a little “fruit inspection.”

And that brings us to the second thing to notice, namely, that the word for “fruit” here is plural, whereas the term in Luke’s statement is singular. Later, we’ll see that it is singular in Matthew 12, as well. What are we to make of the switch from the singular to the plural? I suggest the following. The passage in Matthew 7 is specifically in reference to false prophets (plural), whereas the passages in Luke 6 and Matthew 12 are both in reference to the parabolic fruit tree.

False prophets comprise a widely diverse group of teachers (e.g., Pharisees and Sadducees), all of whom promote wrong thinking about one or more major Bible doctrines (e.g., the nature and being of God, the nature of man and his purpose in the world, the purpose and trajectory of this world, what is sin and what isn’t, etc.). And since the respective “fruit” of these false prophets is often mutually exclusive to a different teaching faction, they collectively make up an assortment of “fruits” wherein each one stands in opposition to true biblical doctrine. As for the parabolic fruit tree, however, the singular reference is sufficient since it represents any individual “tree” (i.e., school of thought) that either adheres to the true biblical doctrine (i.e., “a good tree”) or departs from orthodoxy (i.e., “a bad tree”).

33 “Either make the tree good and its fruit good, or make the tree bad and its fruit bad, for the tree is known by its fruit. 34 You brood of vipers! How can you speak good, when you are evil? For out of the abundance of the heart the mouth speaks. 35 The good person out of his good treasure brings forth good, and the evil person out of his evil treasure brings forth evil. 36 I tell you, on the day of judgment people will give account for every careless word they speak, 37 for by your words you will be justified, and by your words you will be condemned.”

We’ll work our way through these verses in our next blog (Part 2), but for now we simply want to bring together the observations we’ve made thus far. First, the fruit Jesus has in mind in Matthew 7 is that which the false prophets generate. It seems to me, then, that the most logical conclusion is that their fruit is primarily—though not exclusively—in reference to what they teach, or more simply, to their doctrine. Second, false prophets do not form a single cohesive group. Instead, they often compete among themselves in an effort to prey upon the same flock of sheep. Yet they do share one thing in common: Their teaching about one or more major biblical doctrines is fundamentally flawed. Third, the fruit Jesus primarily has in mind has to do with speech, especially speech that promotes a certain type of teaching, which always results in particular actions and behaviors consistent with those same teachings.

We said at the beginning that we would have to leave much unsaid. And much of what we need to leave unsaid here is the fact that the Scripture does teach in other places that a believer’s deeds or actions are also a type of fruit. We’ll briefly touch upon that in our second installment of this article, but for now we simply want to observe that this well-known phrase, mentioned in four different places in two different Gospels, is not primarily in reference to a person’s deeds, at least not directly. Rather, the fruit Jesus refers to is what a false prophet says by way of his or her teaching. This seems patently clear when Jesus immediately moves from this saying to the teaching about the wise man building his house on the rock. The “rock,” of course, is Jesus, which cannot be limited to his teaching only, but also his entire redemptive work. Thus, the hope for anyone who wants to endure the storms of life begins with a firm grounding in solid biblical doctrine. It can’t end there, but it must start there.

This has enormous implications for counseling. Should people who are trying to sort out complex marriage issues seek a counselor who has not thought very deeply about the very first marriage in human history (Gen. 1–2)? Should a person who is grieving the loss of a loved one seek consolation from a counselor who believes mankind evolved from lower life forms, or his credentials are from a school that teaches the same? Should a person seek out a counselor for help with anxiety, or depression, or same sex attraction, or addictions, etc., who would spend more time discussing modern theories, humanistic goals, or behavior modification, than time exploring relevant Bible passages and implementing what these passages teach? In short, Jesus is teaching that believers need to practice discernment and become like the Bereans (cf. Acts 17) who examine the Scriptures to see whether a given teacher’s (or counselor’s) truth claims adhere to sound biblical doctrine. The more counselors and teachers do that, the better equipped people will be to handle the storms of life that will inevitably come.